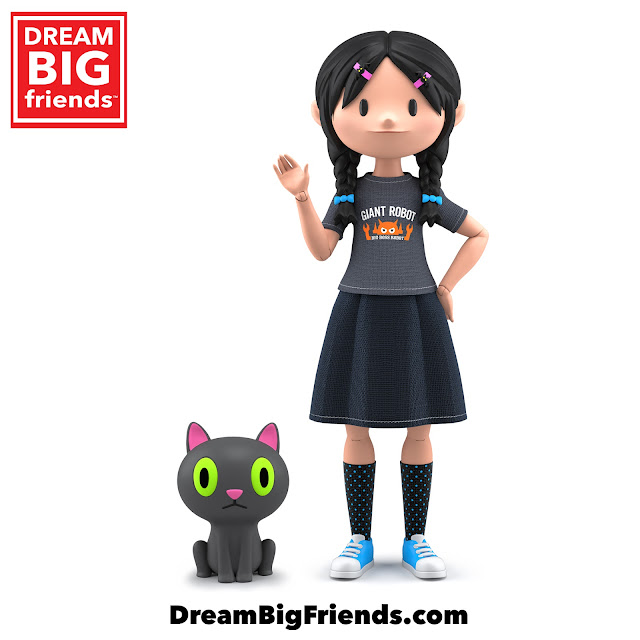 The Kickstarter to fund the production of Yuna, the first character in our expansive Dream Big Friends line of positive, encouraging dolls, is well on its way! Click here to back the Kickstarter - you can order the 10", fully articulated Yuna plus her kitty Kamata for just $40 + shipping!
We just got back from DCon where we revealed the Yuna prototypes to the public for the first time. It was a ton of fun and we had 100% super positive feedback - people LOVE her! Below is David Horvath, co-creator, snapping a pic of the prototypes. 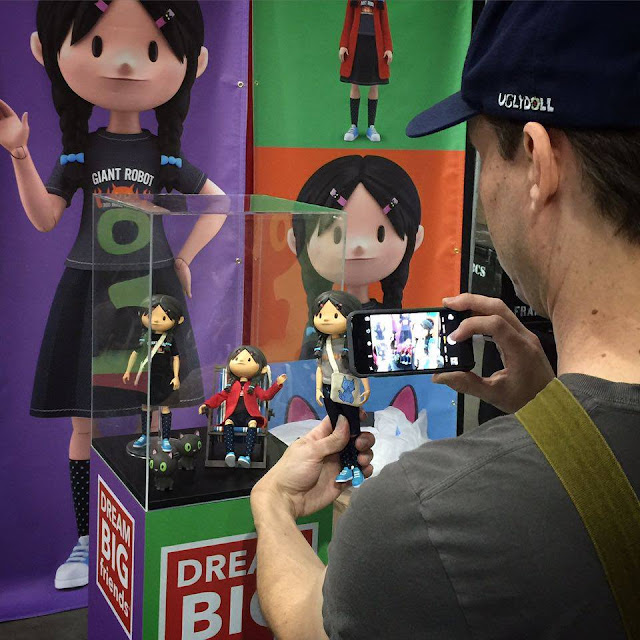 Dream Big Friends is a doll line concept developed by David Horvath and Sun Min (Uglydoll creators) and Klim Kozinevich (Bigshot Toyworks creative lead) that fills a gap in the market for dolls which are fully encouraging of imagination, with positive messages and cute, approachable design.
For instance: Yuna loves science and rockets. She wants to own her own rocket company and fly to Mars, where she will be the first person to walk on the Red Planet! She loves K-pop music and hanging out at Giant Robot (dig the shirt!). She has a cat named Kamata and likes wearing funky socks, and her big red coat is her favorite piece of clothing. The idea is to make Yuna, and all of the Dream Big Friends characters, as real as possible, with unique and distinct qualities that makes them all special. By showing how different and special each character is, Dream Big Friends hopes to encourage both girls and boys to celebrate that which makes each of them special. 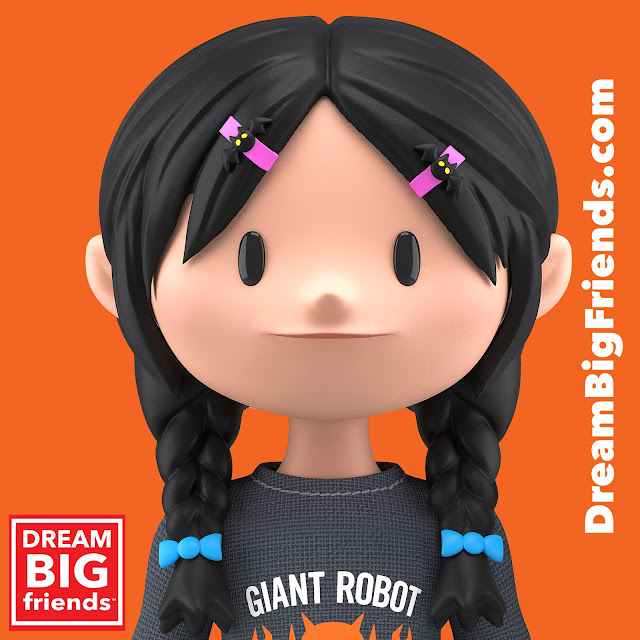 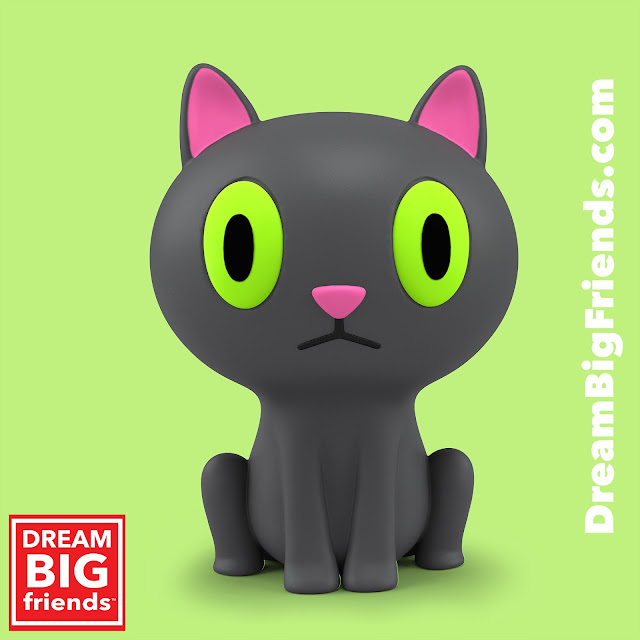 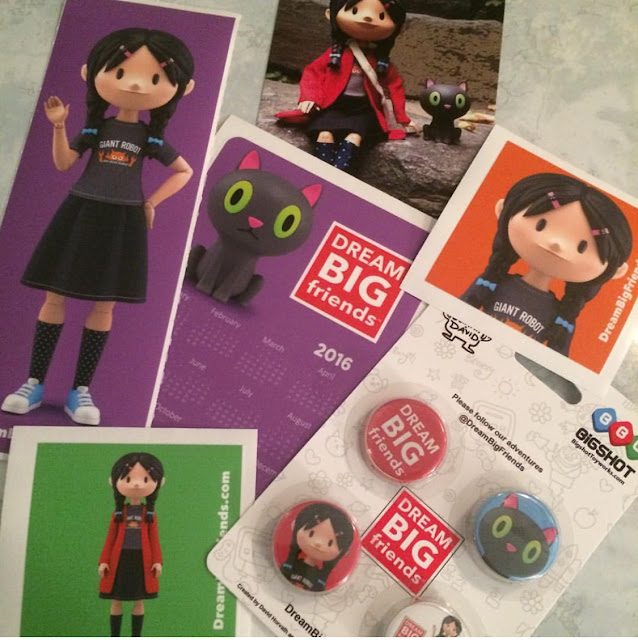 Yuna measures 10" tall and she is a fully articulated doll with real clothing. Dream Big Friends dolls will be safety tested for kids, and the scheduled ship date is Q2/Q3 2016.

The Four Horsies figures (the 4-piece 'Pocalypse Now Gift Packs, as well as the 4-inch Maddies in 5 color variants) have been picked up and have started the long journey to our US warehouse! More info on the arrival dates will be posted soon. They will go up for sale on this website AFTER we complete the shipping to all of our Kickstarter backers. This will be after Christmas since sea shipping takes minimum one month.

We are both headed over to Pasadena, CA now to exhibit at DesignerCon! You will be able to find the following at Booth 901: It's Zero Fucks Friday once again! We've been posting the hashtag #zerofucksfriday for weeks at @zerofuckshero ... every week we find someone who clearly gives Zero Fucks... today it's this rad couple who never lost their cool.

Found this one here, along with a ton of other hilarious NOT GIVING A FUCK seniors!

Do you know someone who deserves a Gold Medal FUnicorn?

Mike Mignola Monkey with a Gun and the FUnicorn sculptures arriving at customers' doorsteps September 03 2015, 0 Comments Our very patient customers are now enjoying the awesome sculptures we just sent to them! After a lengthy session packing and shipping a few hundred packages, many of our customers are now posting up pics of their hauls on Instagram and tagging us at @bigshotklim and @zerofuckshero - here are some of their shots! If you missed out on either of these releases, have no fear: Monkey with a Gun sculptures are still available in both Bronze and Bone colorways, and the elusive FUnicorn can be captured in Original Taste the Rainbow, Gold Medal Edition and Bad to the Bone colorways.

Both sculptures are solid, hefty and finely detailed. Monkeys are $150 each and created in collaboration with Mike Mignola.

Funicorns are $69 each and created out of the sparkle juice that surrounds Klim's spinal column and sometimes leaks from his ears. We don't judge over here.

Limited quantities of each figure left; we will bring some of each to NYCC Booth 208 if there are any left come October.

Note: all sculptures are kitten-friendly and cat-approved.

Great news for collectors: we've uncovered a stash of our Futura Break ACS trains in our warehouse!

In 1980, Futura visited a yard in the Bx with DONDI and executed one of the most iconic whole cars, which he called "Break."

In 2005 we released an official miniature version of this artwork on our 20" All City Style train platform. You can pick yours up here in our shop, very limited quantities left:
http://bigshottoyshop.com/collections/all-city-style/products/all-city-style-futura-break-train

Behind the scenes: printing the Monkey with a Gun letterpress prints today July 17 2015, 0 Comments Shots from today's work at our print shop: super thick letterpress prints that will come with the first 100 Monkey with a Gun preorders! Still more Monkey figures available to preorder, although window for the print run is now closed. Mike Mignola's Monkey with a Gun and our FUnicorns are on the way to us now July 11 2015, 0 Comments

We are happy to announce that the Funicorns and the Mike Mignola Monkey with a Gun figures are now in transit on the way to our warehouse! Yesterday we received images of the figures being loaded up at the beginning of their journey. Sea shipment to the US take several weeks, so to make sure that you don't miss any important updates, you can sign up for our email list here: http://bigshottoyshop.com/pages/email-list Mike Mignola will have some of the final production pieces of his Monkey with a Gun figure on display at Booth 4901. The rest of the Monkeys are just now beginning the journey from factory to our warehouse. We will post up a more specific arrival date once the ship is closer to port. Our friends at 3D Retro will have a limited selection of the original 6-inch Maddies for sale at Booth 5045. Also on hand (but not on sale yet) will be the paint samples of the upcoming 4-inch Four Horsies of the Pocalypse figures. Stop by the 3D Retro/DKE booth to pick up some free Four Horsies swag (very limited availability)! Jason Edmiston will be displaying FUnicorns at his Booth 4617 - stop by to check them out in person and grab some free swag! Jason painted the stupendous painting that became the box art on the FUnicorn boxes. FUnicorns are shipping with the Monkeys, so they will be here and shipping to customers in about one month.

Bigshot Toyworks has a TON more awesome toys at SDCC that we have developed and/or prototyped for our clients! Click here to read our full newsletter covering those toys and where to find them at SDCC. Preview of the exclusive letterpress print that will be included with the Mike Mignola "Monkey with a gun" statue preorders that were placed on or before April 9, 2015.